bq. SALT LAKE CITY, Feb. 12 — Five people were killed and several others were injured in a Salt Lake City mall Monday night when a gunman went on a shooting rampage that ended when the police fatally shot him, the authorities said.
— “New York Times”:http://www.nytimes.com/2007/02/13/us/13slay.html 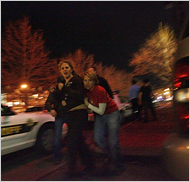 ==Some of you may know that I live about 5-10 minutes from the scene of the shootings tonight, and I just thought I’d post to let those friends outside of Utah know that I’m okay and was not at Trolley Square this evening. This is horrific. I’ve been going to the mall all of my life, I’ve had friends who’ve worked there, I have friends who live within walking distance… it just doesn’t seem real. Anyone who has been to Trolley can tell you it’s not like your typical mall, and to think of that happening there is simply terrifying.

In a sick twist of irony, I had just finished watching Gus Van Sant’s Elephant when I switched over to NBC (intending to watch Heroes) and saw the news coverage of the shootings. Police have not released the names of the 5 victims, so I have no idea if it’s anyone I know. I hope to all I hold dear that it is not.